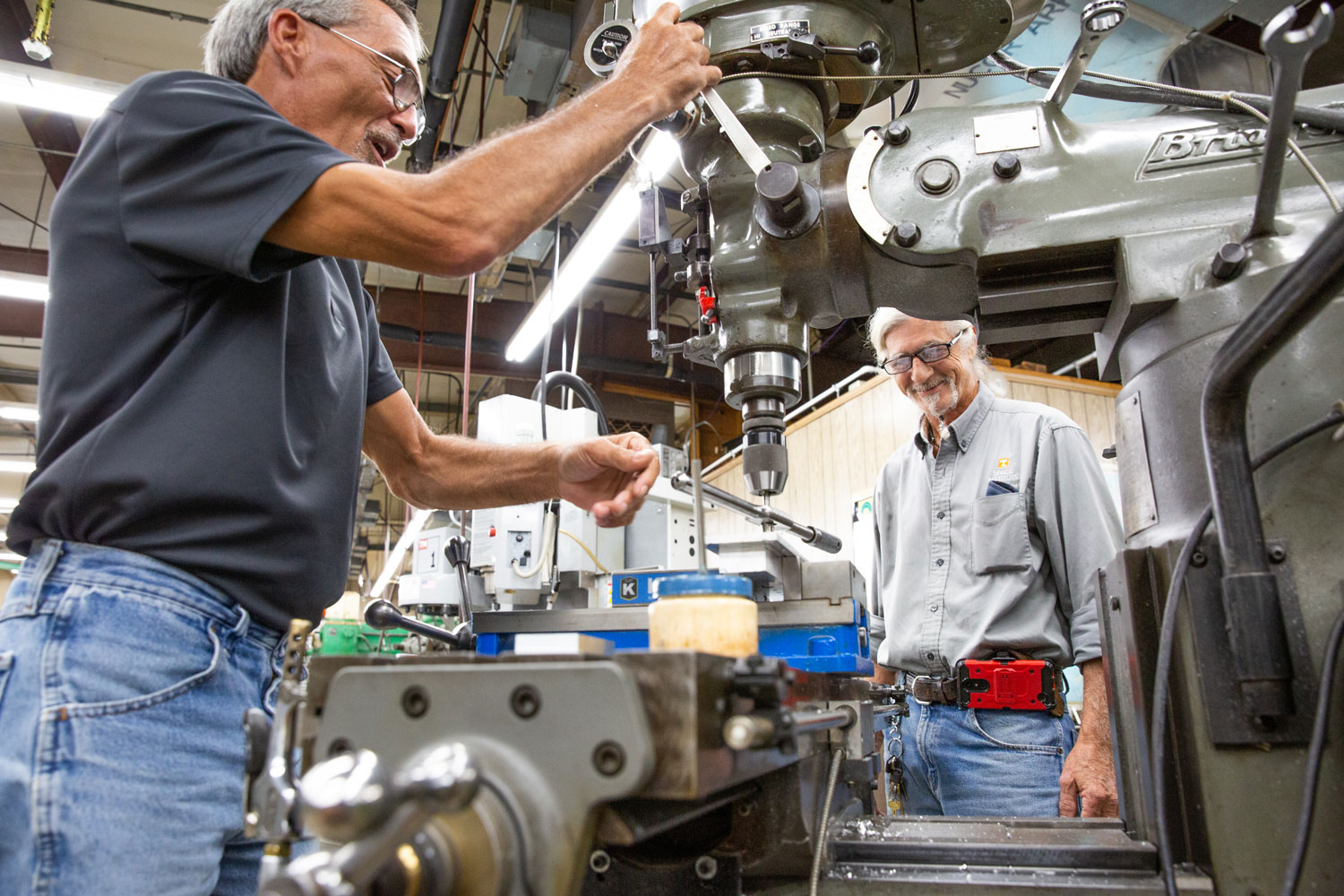 Researchers at the UT Space Institute maintain leadership across spheres of aerospace and mechanical engineering, physics, and beyond. UTSI graduates take off from the Tullahoma, Tennessee, campus and enter industry ready to pilot cutting-edge fields into the future.

Faculty and students alike reach such heights with the support of a proven team of experts in UTSI’s machine shop. This experienced crew adds the boost of being able to machine custom parts on site—highly precise and delivered quickly—for projects like the massive wind tunnels used for advanced research in hypersonics.

Gary Payne helped establish the shop along with founding manager Lloyd Lester, from whom he learned the machinist trade. Payne’s specialty is machining components using the shop’s impressive array of conventional noncomputerized machines. After Lester’s death in 1990, Payne became the shop manager and is now in his 48th year at UTSI.

“We went to the Federal and State Salvage in Nashville and purchased used machines,” Payne recalled of the early days. “The machines were from the World War II era. We brought them back and refurbished them into working order.”

Additional machines for the newly minted shop were purchased in conjunction with the magneto-hydrodynamics test facility, an energy project in the 1980s that sought to increase efficiency in coal-based power plants. The facility kept a crew of six machinists busy throughout that decade. After the project ended, Payne was the sole machinist in support of UTSI research for the next 20 years.

“In 2012 we purchased a small CNC machine that wasn’t used much,” he said. “We brought in Jack LeGeune, who had some CNC experience.”

LeGeune had previously operated his own company, Four-J Manufacturing in Tullahoma, and originally started working at UTSI doing groundskeeping, electrical work, and general maintenance. Joel Davenport, director of research lab support at UTSI, knew LeGeune was a knowledgeable machinist who could put the CNC machine to good use.

“We’ve done some pretty cool stuff,” said LeGeune. “The computer machines are great. Everything that they do, these (non-CNC) machines can do too. The only problem is it takes 20- or 30-plus years of experience to be able to do some of the intricate detail that these machines can do.”

While the UTSI crew does possess the ability to do such intricate work conventionally, prowess with the computer- aided machines adds to their flexibility, particularly in a time crunch.

“A lot of things are just a lot quicker, just a fact of the process,” said LeGeune. “Once you do one on the computer machines and Joel comes back and says, ‘We want another nozzle section’—well, we’ve already got that in the machine. It’s just a matter of setting it up. They both have their place in this day and time, in all honesty. It’s good to have the old mixed with the new.”

Dennis Harbin adds his welding skills to the shop’s mix of cutting-edge capabilities. He also started with the magneto-hydrodynamics test facility and has been on staff for around 24 years.

“I usually prep it, fit it, and do all the welding by myself,” said Harbin. “Some of the pieces have been pretty good- sized pieces. I just kind of fill in when I’m not welding— usually just drilling holes or sawing parts.”

The teamwork exhibited by the machine shop crew extends to the faculty and students across UTSI. The shared confidence makes for a positive and productive workplace.

“Probably one of the best things about working here is the trust they have in you to do what you’re an expert at,” said LeGeune. “The students—that’s the most gratifying thing. They come in here and they’ve got this great idea. When they drop off the raw material and it looks like junk and you hand it back to them, they’re just like, ‘Oh man, that’s great.’ Then, they come back to tell you how it worked and they give credit where credit’s due. That’s really satisfying.”