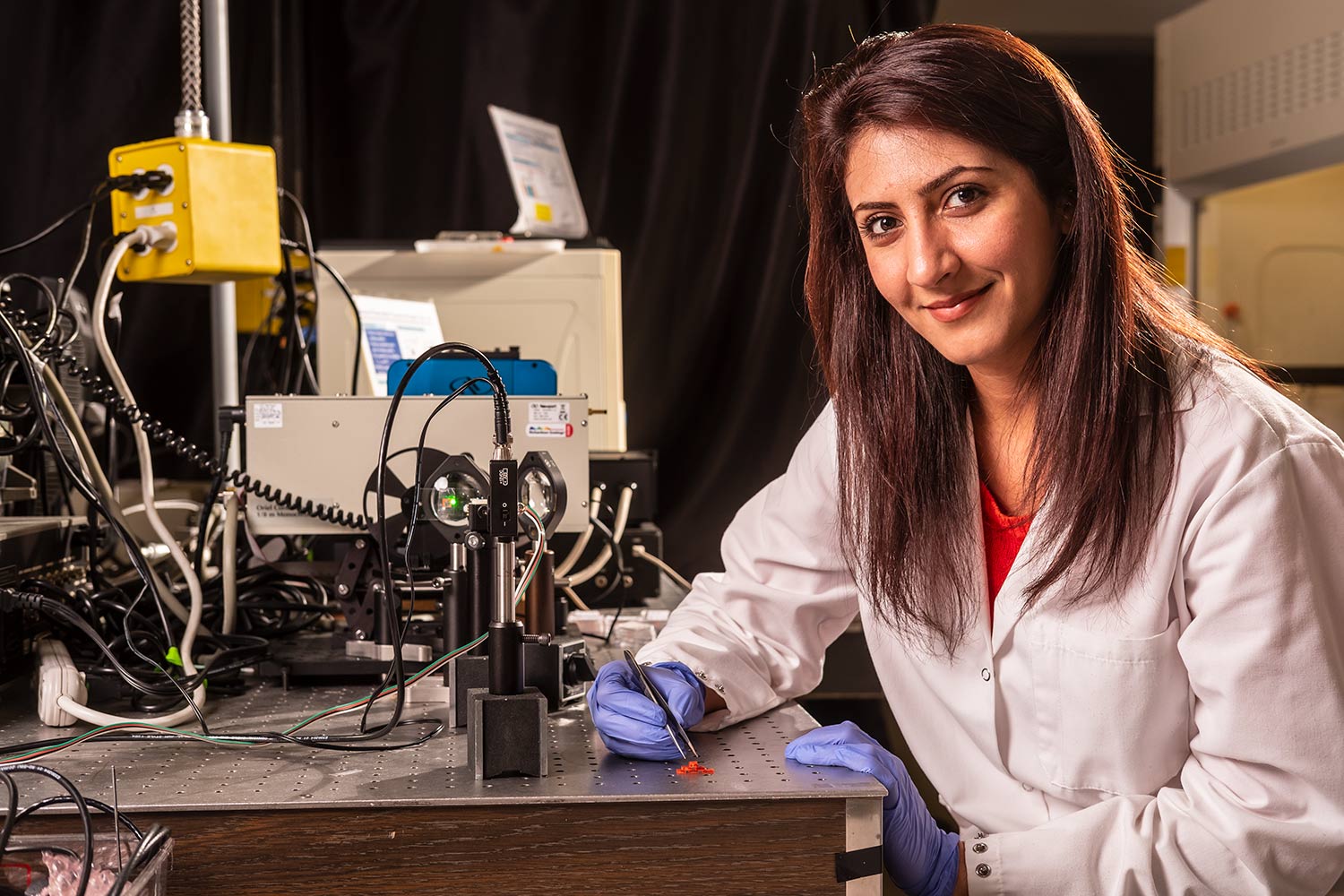 Pushing the Boundaries of Technology with Breakthrough Materials

Solar power farms, medical laboratory innovations, and streaming multiplayer video games don’t seem connected at first, but they all share a dependence on advancements in the field of optoelectronics.

Optoelectronics is the study and application of electronic devices that use light. An important key to unlocking the field’s potential is the use of perovskites—materials that have a wide range of uses, are more cost-effective than the purely silicon-based technology of the past, and can be tailor-made from chemical solutions.

That’s where Materials Science and Engineering Assistant Professor Mahshid Ahmadi comes into play. Ahmadi’s research involves designing what are known as organic inorganic halide perovskites (OIHP)—a general term for a class of materials that can be made from combining several different metallic elements such as lead and tin, organic molecules, and halides to form a perovskite structure.

OIHPs are cost-effective due to their solution processability and ease of fabrication; however, other problems exist that must be overcome prior to their widespread adaptation.

“Current OIHPs lack needed stability when used in normal, standard operations,” Ahmadi said. “What I hope to achieve is to study the origin of the instability and how to mitigate it, look at what their chemistry and electrochemistry looks like when they are under operational conditions such as sunlight, and use what we learn from that to better design the next generation of stable OIHPs.”

Ahmadi has identified areas that seem to be among the biggest stumbling blocks facing the development of new OIHPs and the improvement of their long-term performance.

The plan is to use a small robot that can synthesize a large number of OIHP materials at once while using machine learning algorithms. This innovation will improve and increase the rate of discovery of new compositions as well as help optimize their properties.

Gating experiments—processes in which the ionic channels within substances are opened and closed, usually via electrical charge—will then be used to help researchers learn the specific roles ionic chemistry plays in material synthesis.

Similarly, gating experiments will be used to find the role of different ions in OIHPs, how the ions move in operation condition and react with other transport layers in optoelectronic devices, and how to control them. The feedback from this experiment will be used to determine the next combination of OIHPs to be synthesized, with a goal of more stable chemistry. 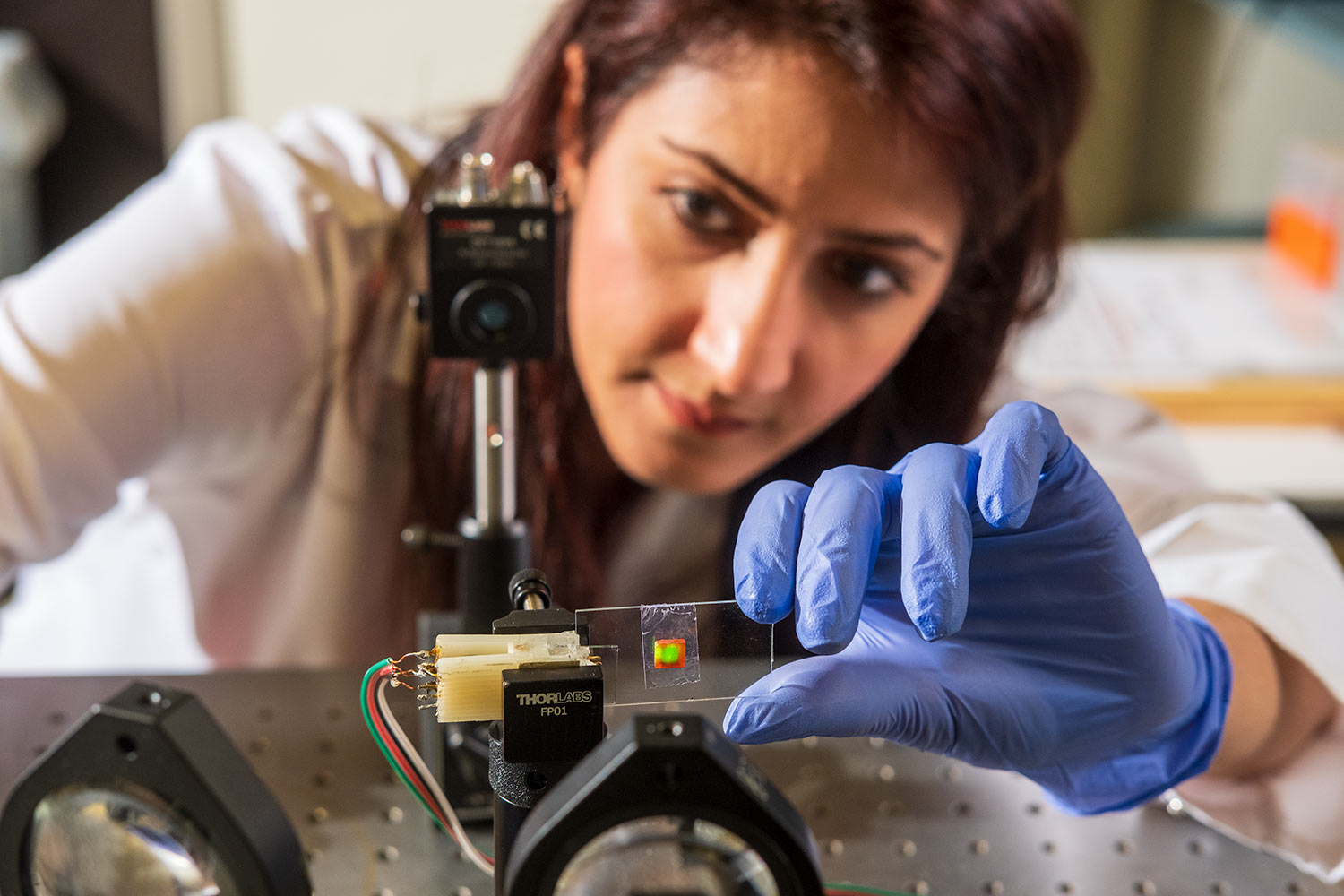 “We will use advanced microscopy and imaging to help us study and gain a better understanding of a number of different properties including ionic chemistry and electrochemistry involved in developing more stable OIHPs,” Ahmadi said. “Being able to automate the synthesis of materials, rapidly characterize them, and use the knowledge to predict behaviors will pay dividends down the road accelerate discovery as we design new materials.”

Ahmadi’s work has been recognized with a National Science Foundation (NSF) Early CAREER Award, which are given to early-career researchers who have shown great promise or ingenuity.

“Earning a CAREER award from the NSF is quite an honor, and it reflects well upon both my work and that of my research collaborators,” Ahmadi said. “I look forward to the advancements that will be made possible thanks to this award and the support that comes with it.”

Like all CAREER awards, Ahmadi’s includes a component aimed at undergraduate or pre-college education. Her goal is to increase participation levels in materials science amongst women and historically underrepresented populations and includes projects, outreach efforts, and career mentoring at both high school and college levels.