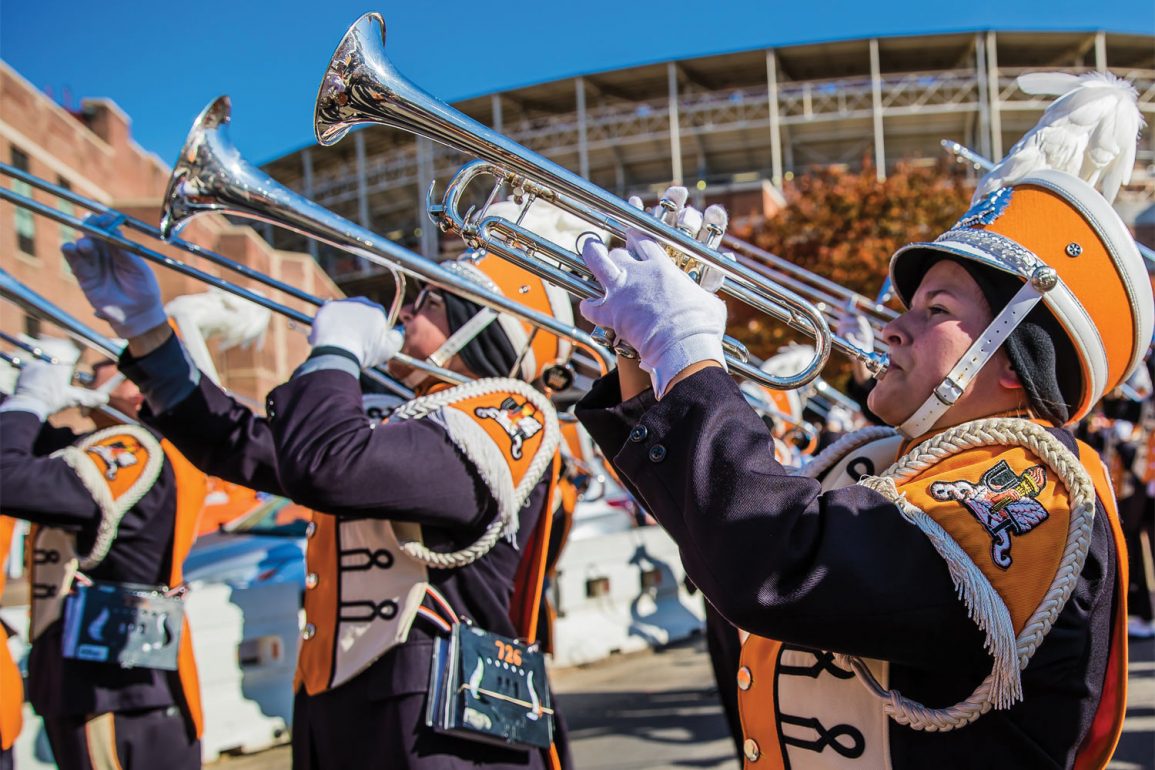 When Sara Wonner auditioned for the UT Pride of the Southland Marching Band and the Lady Vols’ Basketball Pep Band, she didn’t anticipate her band experience would help with her MSE studies. But pursuing a demanding undergraduate degree while also playing trumpet in the prestigious program forced Wonner, now a senior, to be intentional with her time.

“Over the past three years, my time management and organizational skills were tested by my commitment to band, and because of this challenge, my skills in these areas improved,” she said.

She has played the trumpet about ten years, starting in middle school in Dickson County, Tennessee. As high school graduation approached, she found she wasn’t ready to leave music, and the community that comes with being in band, behind.

I’m glad I decided to do band in college because the friends and experiences I have made throughout my years in band have shaped who I am today. It is 100 percent one of the best decisions I’ve ever made.”

Wonner, who is also pursuing a minor in mathematics, said the MSE department has been very supportive of her participation in band. When she pointed out a scheduling conflict between a required class and band practice, which would have prevented her from playing in the band her senior year, Department Head Veerle Keppens worked to get the class rescheduled.

“The department going to that length to accommodate me speaks volumes, and I will always be so thankful for the department for granting me my final year in Pride,” Wonner said.

Band and engineering classes aren’t the only demands on her time. In the spring, Wonner joined UT’s Materials Bowl team and competed at the Minerals, Metals & Materials Society’s Annual Meeting. The team fought its way to the final round, where it lost to the defending champions from the Colorado School of Mines. She said achieving second place was still “an amazing moment” and the team hopes to take home first-place in 2020. She also is a member of Tau Beta Pi, the engineering honor society.

Wonner also spent this summer interning at ORNL as part of its Science Undergraduate Laboratory Internship program. She worked in the nuclear structural materials group in the materials science and technology division studying tungsten-steel laminate composites, which consist of alternating layers of tungsten foil and steel foil.

“I was primarily involved in the fabrication process. The composites that I helped fabricate will eventually be machined into tensile test bars to be evaluated,” she said.

The internship has inspired her current post-graduation plans. She intends to pursue a PhD in either MSE or nuclear engineering. Whichever path she chooses, she said she will study nuclear materials in the context of their use in reactors.

Until graduation, though, you will find Wonner pursuing both her passions in engineering classrooms, Neyland Stadium, and Thompson-Boling Arena.