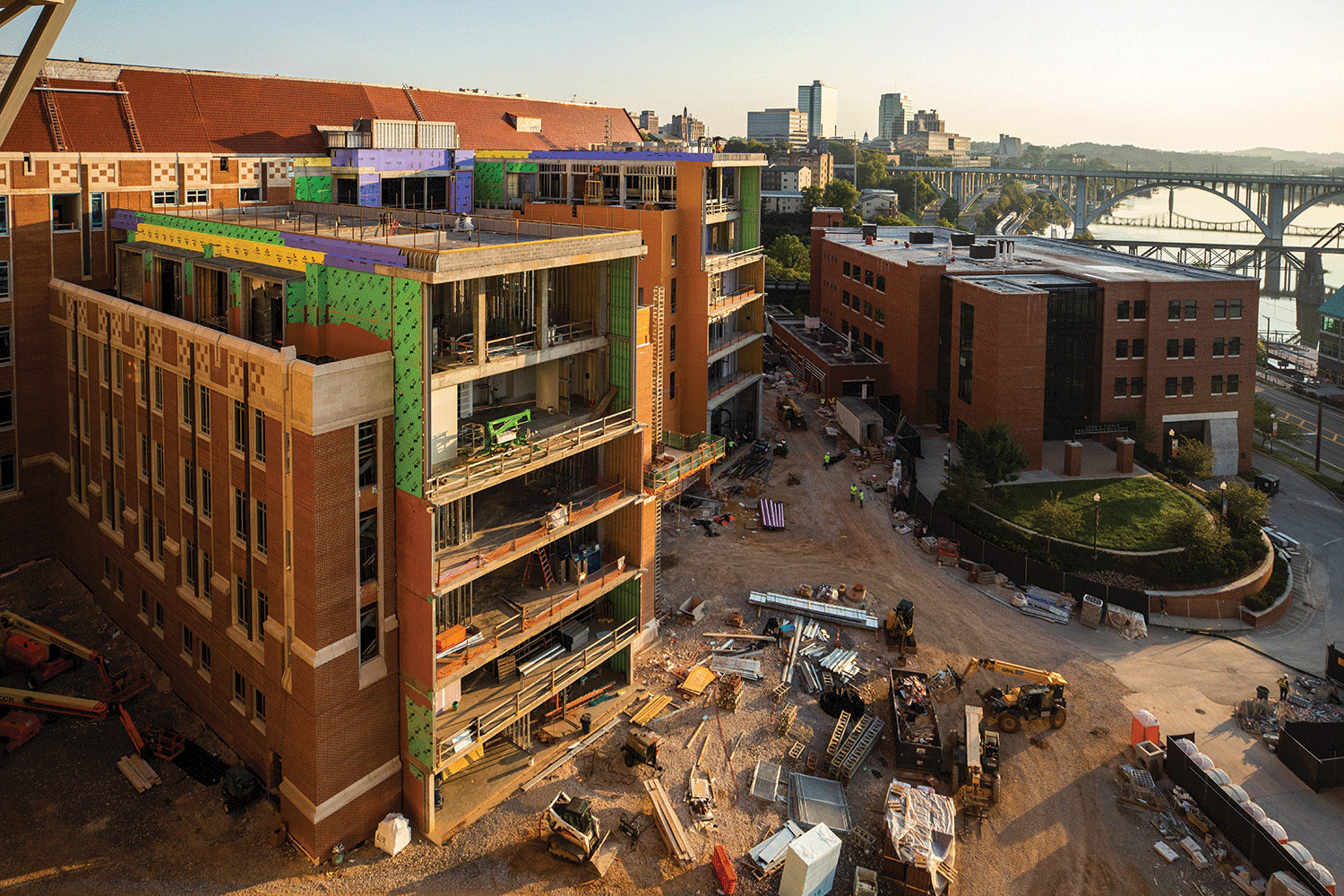 A Legacy of Support

For the last couple of years, students, faculty, staff, and visitors to the Hill or Neyland Stadium at the University of Tennessee, Knoxville, have watched as a new Engineering Complex has gone from concept to a beautiful structure that, when complete next fall, will be the largest academic building on campus.

Now, that building has a name.

Today, the UT Board of Trustees approved the naming of the Zeanah Engineering Complex in honor of longtime benefactors and alumni Eric and Elaine Zeanah.

“Our entire family is really focused on engineering, education, and the sciences,” said Eric Zeanah. “Elaine and I were going to contribute on into the future anyway, so in this time of COVID, we decided to make a statement to the college and let the university know the support was there so it could plan forward.”

“This gift is a truly wonderful investment in the continued, long-term success of the college,” said Janis Terpenny, who serves as dean and the Wayne T. Davis Dean’s Chair of the Tickle College of Engineering. “We couldn’t be prouder of Eric’s accomplishments and his ongoing efforts to engage, mentor, and inspire the next generation of engineering graduates.”

Zeanah, a 1984 industrial and systems engineering (ISE) graduate, is owner and president of American Accessories International, a global product development and manufacturing company founded by Zeanah’s mentor, former ISE Professor and Department Head Dan Doulet. After establishing ownership in 1995, Zeanah utilized the principles of applied industrial engineering to expand the company into a leader in product design and commercialization for many large corporations, such as Johnson & Johnson, Ethicon, Amway, Unilever, and more.

Along with his wife, Elaine, a 1982 graduate of UT’s College of Nursing, the Zeanahs have built a lengthy history of philanthropy when it comes to UT.

“We really got reacquainted with the college about 14 years ago when our son was an ISE student and quickly realized there were a lot of things that we could do to provide support,” Zeanah said. “It’s been interesting to be involved at a time when John Tickle and others are involved; where we could actually make a difference, not just contribute but see where it could go, give our thoughts, and see those go into play.”

The Zeanahs helped create the Wayne T. Davis Endowed Dean’s Chair, which has allowed the dean to quickly fund new or critical initiatives as needed, while the establishment of the Jessie Rogers Zeanah Faculty Fellow—named in honor of his mother—has helped support the research efforts of Department of Mechanical, Aerospace, and Biomedical Engineering Associate Professor Stephanie TerMaath.

We’re for education no matter where it applies. That’s where our focus has always been—where we can support education.”

The Zeanahs’ contributions to student success are notable, including the establishment of the American Accessories International Endowed Scholarship, which supports juniors and seniors majoring in industrial engineering; the Zeanah Student Support Fund, which supports engineering student organizations to attend conferences and bring in guest speakers; and the naming of the Doulet-Zeanah Student Lounge in the John D. Tickle Building, which provides a quiet place for students to study and relax in between classes and honors Doulet.

“We’re for education no matter where it applies,” said Zeanah. “That’s where our focus has always been—where we can support education. Being able to set up an endowment that continues to provide funding and support for the things we care about is a way of giving back that makes a difference.”

His efforts to help students succeed also extend to his company.

“Last fall, I visited Eric at his company, which included meeting the many UT students who had worked with him over the summer,” said Terpenny. “Their presentations were impressive; Eric’s mentoring and high standards had clearly made an impact.”

He played a key role in the creation of, and remains a vocal advocate for, WomEngineers Day, a biennial event hosted by the college that brings together students and practicing engineers of all genders, cultures, and races to talk about the challenges, opportunities, and unique situations facing women in engineering. Then-electrical engineering student Jessica Boles had an interest in doing such an event through UT’s Society of Women Engineers section, but for Zeanah, it was a chance to do something more.

“One of the things Jessica and I were most proud of was that conference was 40 percent men, and afterward the men were saying, ‘We really felt welcomed and learned so much,’” said Zeanah of the inaugural 2015 event. “It was all about how people across diverse cultures and backgrounds can come together as one and worked together and see each other’s perspectives.”

The Zeanahs’ support also extends outside the college to the VOLeaders Academy, which encourages student—athletes to use their roles to positively change society.

In April, the couple donated over 20,000 pieces of PPE to area doctors, hospitals, and caregivers in need when supplies were depleted.

Additionally, the Zeanahs support the UT Veterinary Medical Center through their Beagle Boys Endowment, in honor of their dogs, to cover costs for people needing the facility’s services but can’t afford to pay.

“The Zeanahs have made a tremendous impact on the college over the years, and it’s because of the generosity of alumni like this that we have been able to grow both the college and its reputation,” said Chancellor Donde Plowman. “This new, state-of-the-art building will house the college’s first-year programs, and I couldn’t be prouder that the Zeanah Engineering Complex will be the first impression a lot of our young, promising scholars have of their university.”

As for the Zeanah Engineering Complex, the $129 million, 228,000-square-foot structure will open in fall 2021 and serve as a “gateway to engineering,” giving students across all engineering disciplines hands-on experiences from their first day as students.

It will be home to UT’s top-ranked Department of Nuclear Engineering, the college’s Jerry E. Stoneking engage Engineering Fundamentals and Joseph C. and Judith E. Cook Grand Challenge Honors programs, the Min H. and Yu Fan Kao Innovation and Collaboration Studio, state-of-the-art classroom and advanced research laboratory spaces, and will be the hub for the Tickle College of Engineering leadership and administrative operations.

The Zeanahs have made a tremendous impact on the college over the years, and it’s because of the generosity of alumni like this that we have been able to grow both the college and its reputation.

Follow along on a walkthrough of the Zeanah Engineering Complex with UT Facilities Services Project Manager Justin Dothard.

Check out the progress so far on the Zeanah Engineering Complex.