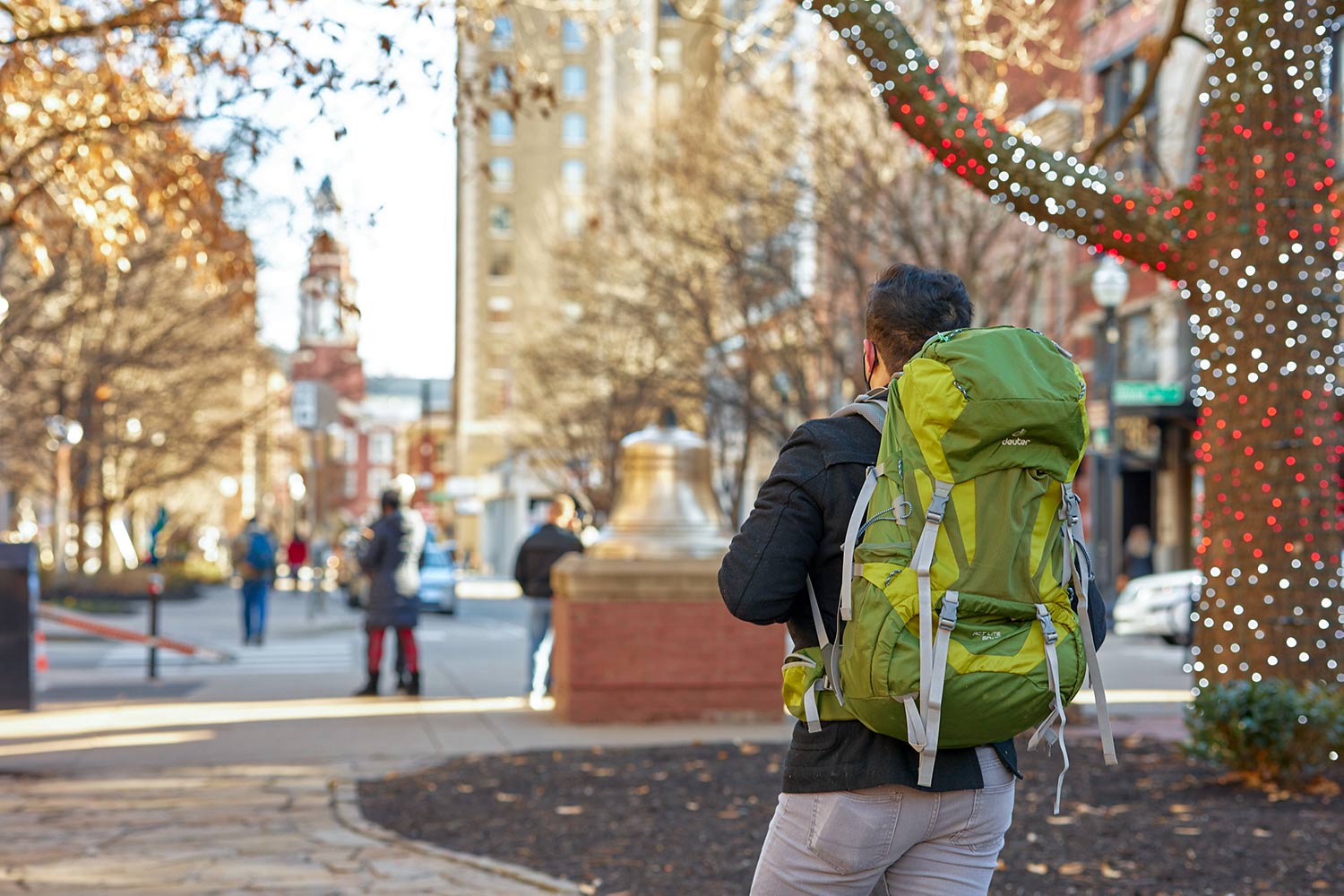 Someone wearing a backpack, looking at their phone with earbuds in as they walk seems normal, even if that person is really monitoring a crowd for possible terror threats. That’s how the Department of Homeland Security (DHS) likes it. Two professors recently completed a five-year project funded by DHS to develop and prove the concept of a portable nuclear or radiation detector that could be used with minimal awareness from the public or possible terror cells.

Picture a scene. It’s Super Bowl Sunday, February 6, 2022, at SoFi Stadium in Los Angeles, California, home of both the NFL’s Rams and Chargers. The stadium is near the center of a sprawling metropolis of nearly 19 million people, and more than 100,000 fans have descended on the stadium to watch the event in person, with millions more tuning in from around the nation and the world.

Having all that attention makes the event an attractive target for those who would want to do harm to the US.

Mixed in with the tailgaters, fans, sponsors, and media representatives, a would-be terrorist meanders through the crowd, seemingly no different than any other average person. Eager to strike at this beloved symbol of America in a grand way, the attacker has two options, each one chilling in its own way.

In a worst-case scenario, they could obtain an improvised nuclear device filled with enough enriched material to create an actual nuclear explosion. Though less likely due to the safeguards surrounding most of the world’s supply of such material and the amount of material required, it is the nightmare scenario that has played out in a number of movies and television shows throughout the years.

Alternately, they could be hoping to spread radiological material through a conventional explosion—a so-called “dirty bomb.” Both scenarios would cripple its target area, the economy, and the psyche of the nation for generations.

Although they don’t know it yet, their plan is already thwarted as they make their way through the crowd toward the stadium, thanks to an ingenious device that has been tracking their illicit cargo with every movement they have made. 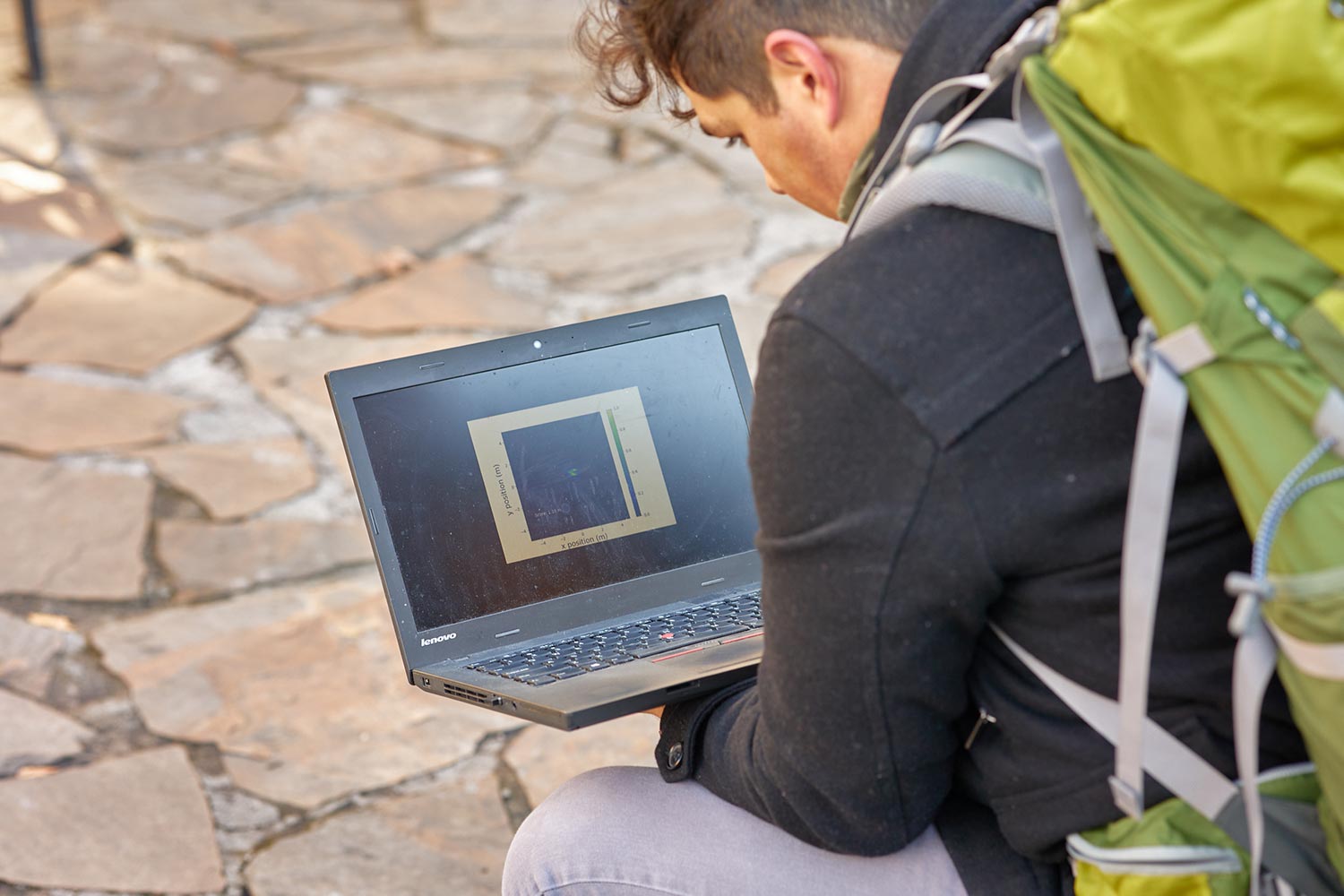 The instrument of detection that allowed law enforcement to step in and apprehend the suspect? A simple backpack. At least, that’s how it appears to a casual observer, and, by deploying a number of them via a network of otherwise nondescript people, the potential threat is caught before any harm is done.

“What we’ve designed is a detection array that can help pinpoint radioactive sources with a calculated degree of certainty,” said Professor and UCOR Fellow Jason Hayward, of the Department of Nuclear Engineering. “It fits inside a normal, everyday backpack, which gives the user a better ability to blend into the crowd as they conduct their security sweeps.” 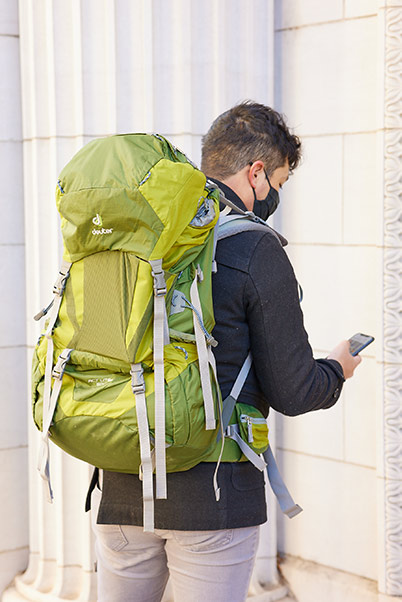 It’s all part of a program called Wearable Intelligent Nuclear Detection (WIND) that both the DHS and the Department of Energy’s National Nuclear Security Administration (NNSA) have supported. UT began work on the project in 2015, with Hayward focused more on the detection portion of the design and Gonzalez Family Professor Hairong Qi, of the Min H. Kao Department of Electrical Engineering and Computer Science, taking the lead on the parts of the project related to tracking and monitoring suspects.

When advanced algorithms are put into use with the tracking and detection aspects of the design, the WIND device makes judgments about a suspect’s position, whether they’ve handed off the material to other potential suspects, and even tells the user what degree of certainty it placed on those decisions.

“Incorporating video surveillance into the device improved localization estimates by around 70 percent,” said Qi. “Not only does it improve outcomes overall, but it allows the system to build out grids in a given visual frame and predict where the material might be within that image, as opposed to merely giving a general direction.”

Hayward pointed out that the system is unique due to its combination of concepts that are each individually groundbreaking in their own ways, with an unprecedented combination of portability, a detection system that provides near-continuous location estimates, and tracking of potential suspects through low-cost imagery.

Graduate students under both Qi and Hayward have helped with the project over the last few years: Recent graduate Carl Britt (BS/NE, ’16, PhD/NE, ’21) based his thesis on the project and his work involving advancements in location and direction.

“Current detectors can easily run into the tens of thousands of dollars, all the way up to around $1 million,” said Britt, who held a fellowship through the NNSA while at UT. “Our system is portable, reliable, accurate, and could cost around $25,000 for each full backpack system. While that is more than some of the cheaper, non-visual systems that are out there, ours can also help with implementation since it isn’t as cost-prohibitive to adopt as the top-end models, but is more robust than cheaper systems without sacrificing security.”

All of which should help make for a safer world, thanks to UT.

“Incorporating video surveillance into the device improved localization estimates by around 70 percent. Not only does it improve outcomes overall, but it allows the system to build out grids in a given visual frame and predict where the material might be within that image, as opposed to merely giving a general direction.
—Hairong Qi