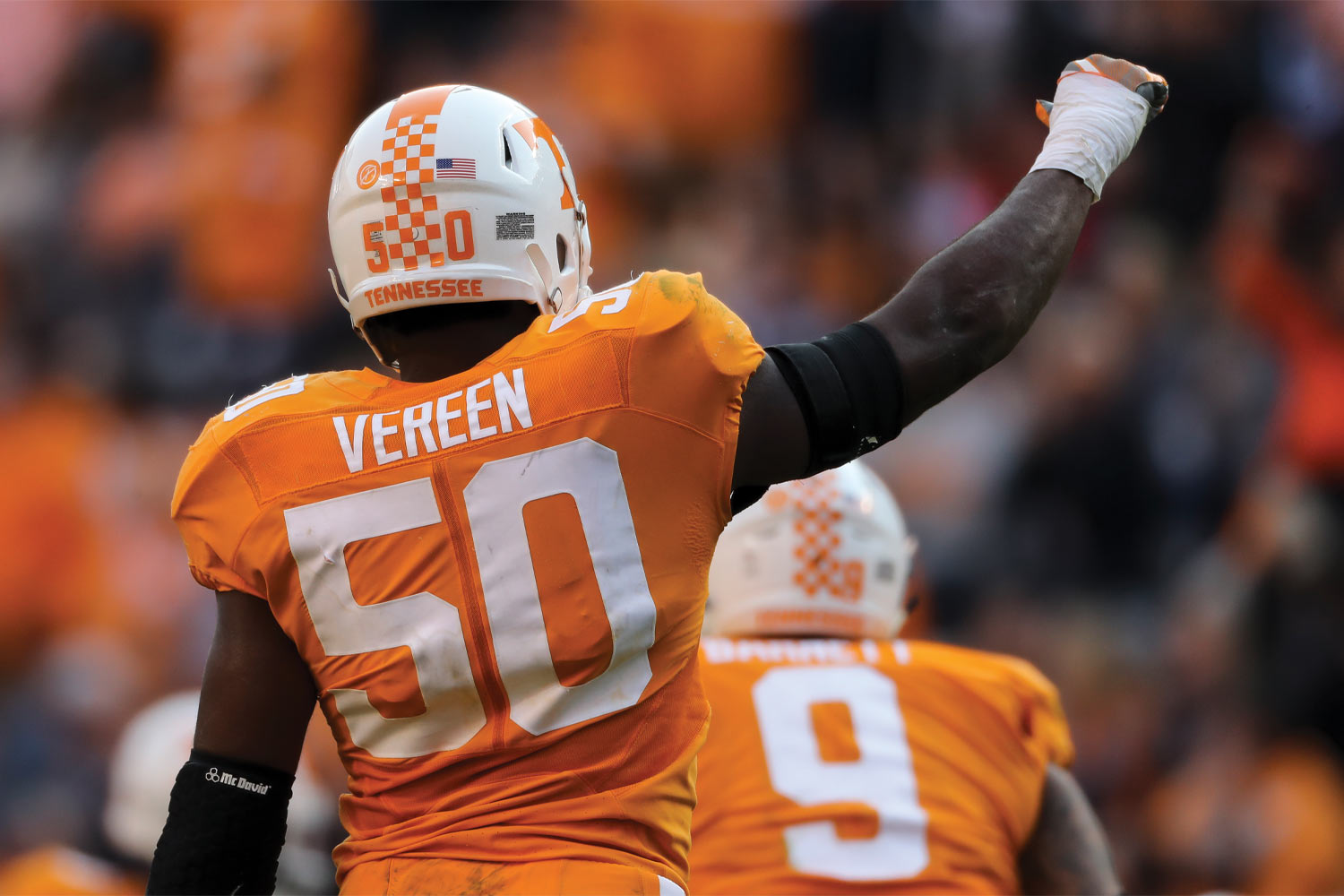 When you hear recurring questions about your ability to start as defensive end for the Vols and also study computer science, doubt would seem natural…not so for Corey Vereen (BS/CS, ’17).

Vereen became fascinated with engineering after repairing his home computer. Influence from his brother who also studied engineering encouraged that interest. Athletic programs from his native Florida and across the South courted Vereen, a celebrated high school football player.

“At UT, I sat down with an EECS professor and discussed the computer science program,” said Vereen. “There was an interest in academic success that I didn’t see elsewhere. With that academic support, UT’s football history, crazy fans, and stadium, my choice was easy.”

At his very first practice, Vereen’s determination to do both football and computer science was questioned by another player.

“I said ‘you don’t know me, dude,’” recounted Vereen. “I was there to get my degree because it’s what pays the bills when you can’t play football anymore. I had that understanding going into it, and without my mom and dad, I wouldn’t have had that mindset.”

Of course, there was some validity to his fellow player’s concern, despite Vereen’s fervor.

“Doing football and engineering was the hardest time in my life,” said Vereen. “There’s nothing like having a CS 360 assignment due the same week you play Alabama. But thankfully, I don’t think there’s a professor or TA at UT that doesn’t want students to succeed.”

Professor Michael Berry was one such professor, whom Vereen looked to during his early years in computer science.

“We’re very proud of Corey,” Berry said. “He did well in a challenging program, and you would hardly have guessed that he maintained a starting position in a premier college football program. Corey’s successful career in computing is due to determination and a passion for problem-solving that ranged from dissecting the spread offense on the field to designing robust web/mobile software for real-world applications.”

After a couple years of professional play that included a stint with the Patriots and a couple injuries, Vereen chose to focus on his career in computer science and technology. He’s a year into a job as a junior software developer with Onlife Health, which provides software for companies that allows employees to track their health, set goals, and better their everyday lives.

Doing football and engineering was the hardest time in my life, there’s nothing like having a CS 360 assignment due the same week you play Alabama. But thankfully, I don’t think there’s a professor or TA at UT that doesn’t want students to succeed.”

“People don’t realize the toll playing takes, physically and also mentally with being away from family,” said Vereen. “It came down to deciding what I really want. Ultimately, I want to be with family, especially my fiancée before we get married this fall. I also want to build a career in technology and one day start my own tech company.”

Vereen is gaining experience to do just that, thanks to his degree. Despite the doubters, Vereen walked across UT’s commencement stage in 2017.

“It’s hard to say which was better, graduating or beating Florida in Neyland,” said Vereen with a smile.

With his drive, no doubt many sweeter victories await.