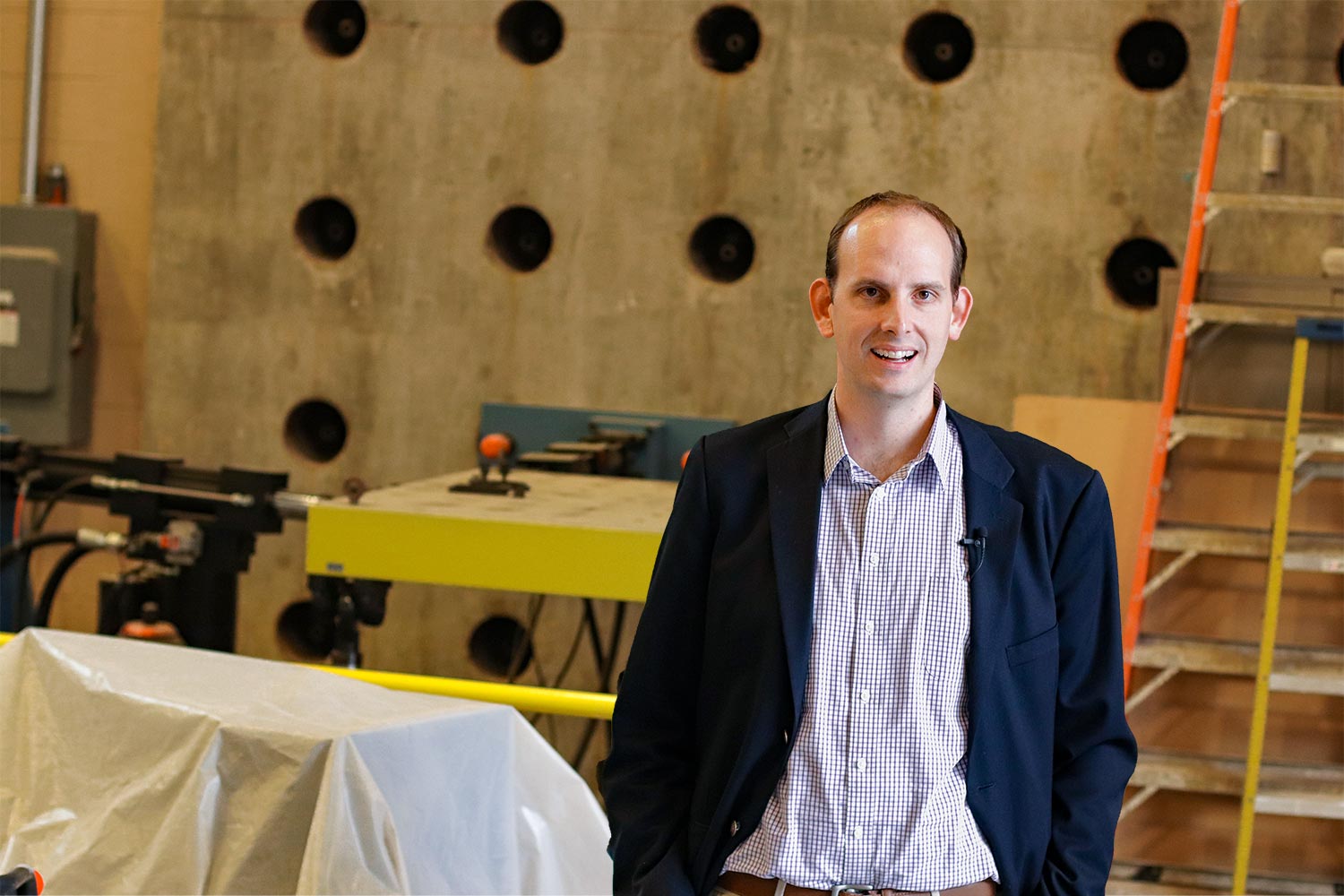 A Sense of Stability

If a group is talking about music, terms like resonance and frequency would seem both familiar and perfectly in place, yet many might be surprised to know they also play a key role during earthquakes.

Earthquakes cause resonances and create frequencies in the ground beneath us, with variables like speed and the type of underlying bedrock determining their particular form in a given tremor. Along with the depth and duration of the quake, the resonance and frequency it creates helps determine how destructive it is.

Assistant Professor of Civil and Environmental Engineering Nicholas Wierschem has a plan to tackle those concerns, all while better understanding their effect in the first place.

“Every building has a resonance, which is the natural frequency at which a building responds most to given waves in an earthquake,” Wierschem said. “When a quake occurs, the more closely the frequency of the waves it creates underground match the building’s frequency, the greater the swaying and potential damage or even loss of that building.”

To counteract those forces, his project centers around what are known as passive protection devices.

Currently, one of the quake-resistant strategies that are commonly used feature sacrificial elements. During an earthquake, these elements take the brunt of the forces and are themselves damaged, but reduce the impact on the whole building.

The systems Wierschem has in mind differ in that they take the vibration caused by the quake and send it into a rotational flywheel, which uses the energy to harmlessly spin a wheel, safely relieving the energy, with a greatly reduced impact on the building.

Importantly, the device also accounts for variances in frequency through what is known as variable inertance, or the ability to react and shift the frequency of the structure during an earthquake.

The initial idea came from a device used in Formula One racecars and used in a couple of buildings in Japan that takes in the energy like the models I am developing, but that energy then has to be released,” Wierschem said. “In my approach, the forces are accounted for in a non-linear way, so it’s expended without having to go back into the building.”

His system can be retrofitted to existing buildings with an initial startup cost similar to other methods, but his offers the advantage of not having to be monitored or adjusted, giving it a financially long-term advantage.

Wierschem included an education component in his research, which, for him, was an easy choice.

“I’m a Tennessee Promise mentor, so I wanted to leverage that,” he said. “I want to have an outreach event to bring in Tennessee Promise students to the college, to help them move from a two-year community college degree to a four-year degree.”

Wierschem also plans to educate younger students by utilizing toys to show how the engineering behind some of the most popular toys works.

Like his research, that work could help serve to give those students a stable foundation.