Writing and photography by Randall Brown. 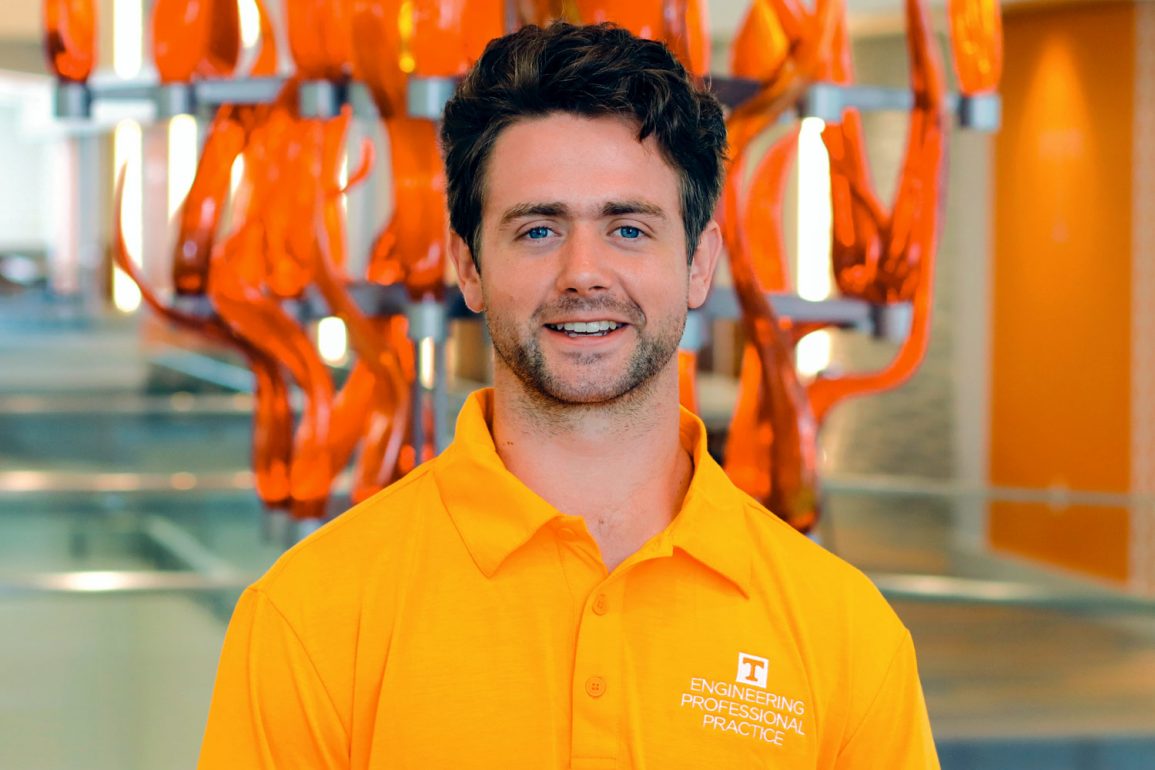 Nicholas Ross was enjoying a day at the Delta Tau Delta fraternity house, in the days before the campus “went remote,” when Vice Chancellor for Student Life Frank Cuevas surprised him with a 2020 Torchbearer Award.

The location made the moment all the more meaningful: Ross is not just a Delt member, he was also the chapter president in 2018.

“It was an awesome experience because Delt was a huge part of my college experience,” he said. “I know the guys in my fraternity looked up to me both personally and as a chapter leader, so I am hopeful that their witnessing how UT recognizes its student leaders will inspire some of them to make their own impact on the UT community.”

Ross, a 2020 graduate from Johnson City, Tennessee, built a proper Torchbearer’s resume in his time at UT. He majored in chemical engineering through the Chancellor’s Honors program and was a National Academy of Engineering Grand Challenge Scholar with extensive undergraduate research experience, including an internship at ORNL.

Ross was an Ignite team leader and student director, a VOLbreaks trip leader and student coordinator, the founder and president of Knoxville Elementary Outreach, and a Student Ambassador for the college’s Office of Engineering Professional Practice.

Ross contributes the core of his success to the Grand Challenge Scholars program.

“It’s a tremendous force for good in the college,” he said, citing the opportunity he received as a first-year student to design a student-run community development center, Knoxville Elementary Outreach, as his final project. “Through this experience, I first learned that engineers have the potential and responsibility to be more than just technical professionals. The Grand Challenge program reinforced this lesson throughout my time at UT.”

From this foundation, Ross went on to participate as an undergraduate researcher with Jon Hathaway, associate professor in civil and environmental engineering, whom he came to know as a mentor and friend.

“To me, being a Volunteer means being committed to leadership as embodied through service, diligence, and excellence.”
—Nicholas Ross

“He provided an example of how a professional should produce tangible results without wavering from their purpose and how a leader can get the most out of his team through kindness and investment,” said Ross. The research into green infrastructure and urban water issues inspired him to pursue a career in urban development.

With all that under his belt, he’s also proud of simply having his degree.

“Honestly, I can get pretty emotional thinking about being a UT alumni,” he said. “It’s something I will have for the rest of my life. I am so proud of my degree from Tickle and my alma mater.”

For summer 2020, Ross did metal design in North Carolina as an engineering intern for Oak Ridge Industries—and put back money for grad school. He is on schedule to pursue a master’s degree in environmental engineering from Carnegie Mellon University (CMU).
Ross hopes to continue developing his leadership skills both as an engineer and as a public servant, eventually obtaining his PE and establishing a business that would help implement intelligent infrastructure for cities.

“I plan to bridge my two leadership focuses by commissioning as a Civil Engineering Officer in the US Navy Reserves following my time at CMU,” he said. “Early in my career as a public servant, I plan on contributing to and leading community-based secondary education initiatives. Later in my career I hope to run for a local elected office.”

Ross’s grasp of the engineer’s responsibility exemplifies the role of the Torchbearer, and shines a light on his ongoing potential to conquer the grand challenges ahead.