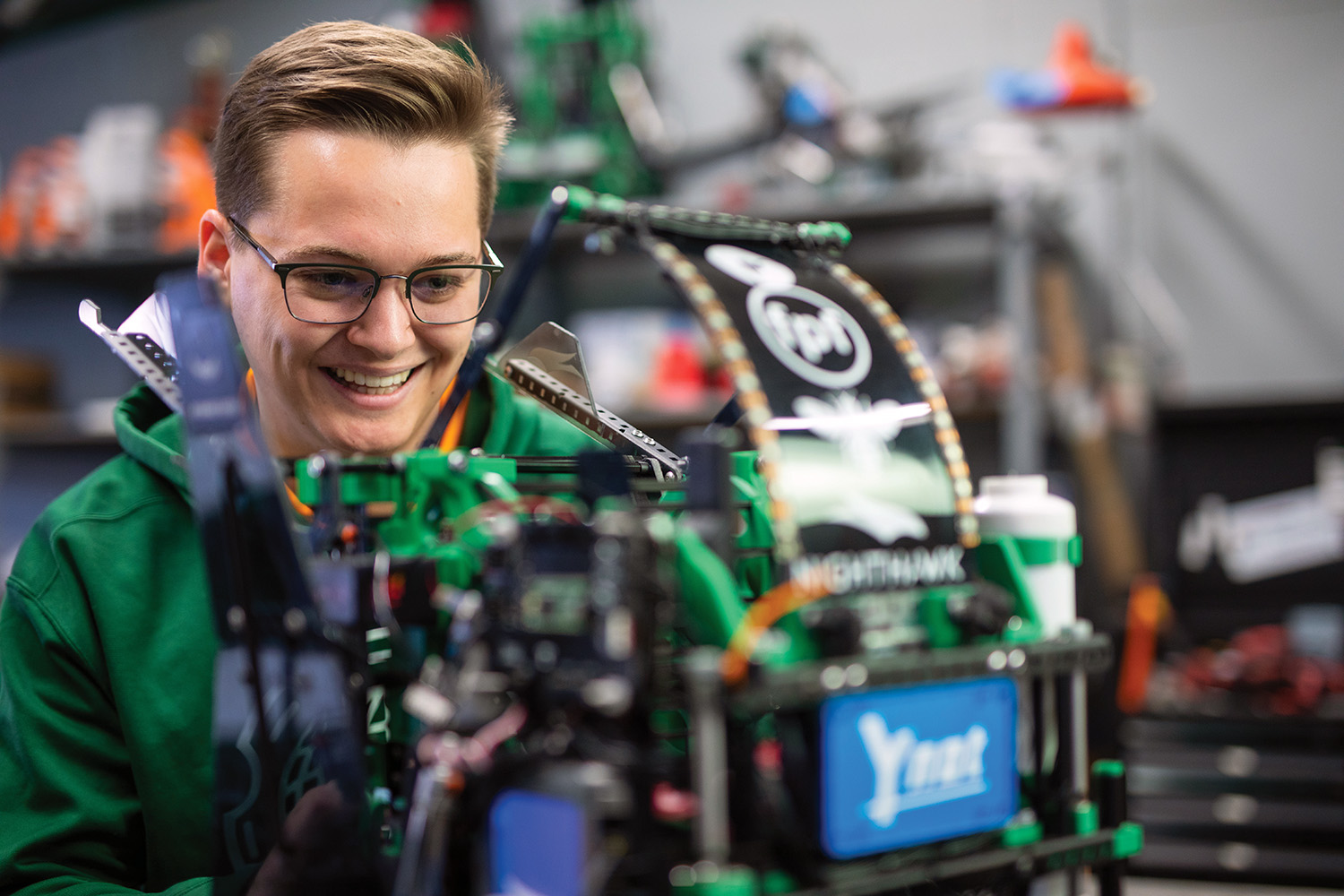 Some graduating students, looking back from where they started, are surprised to see how far they’ve come. But not Grant Kobes, an industrial engineering major and honors student from Spartanburg, South Carolina. Kobes arrived for his first year at the University of Tennessee, Knoxville, as a Vol with a plan. Not only has he fulfilled his aspirations, he now leaves behind a legacy of success for future engineering students to build upon.

In high school, Kobes established a championship-winning VEX Robotics Competition team that became the most decorated VEX team in South Carolina. He wanted to find a college where he could pursue his engineering degree in a dynamic learning environment focused on innovation and project-based learning—and where he could start a VEX U team and take part in national student competitions.

Enter the Tickle College of Engineering.

Kobes was accepted to multiple universities with top-ranked engineering programs, but after attending UT’s High School Introduction to Engineering Systems for Twelfth Graders (HITES12) program, he knew he’d found all the qualities and opportunities he had been seeking. Upon admission, Kobes was awarded the prestigious Chancellor’s Scholarship and selected for the inaugural class of the Honors Leadership Program, allowing him to achieve his academic and extracurricular goals while also graduating debt free.

I knew from personal experience that participating in robotics helped foster my own interest in studying engineering in college.”

Kobes wasted no time getting started.

By September of his first semester he had found a mentor—Travis Griffin, director of engineering diversity programs—to help him start an official VEX U team. With the mission to grow a student robotics program applying course knowledge in a hands-on competitive environment, and a long-term vision of inspiring K–12 students in the Knoxville community to pursue STEM degrees at UT, Kobes began work on the team’s first robot on the floor of his residence hall room. By November the team, named YNOT, had eight dedicated members—seven engineering students and one anthropology major. 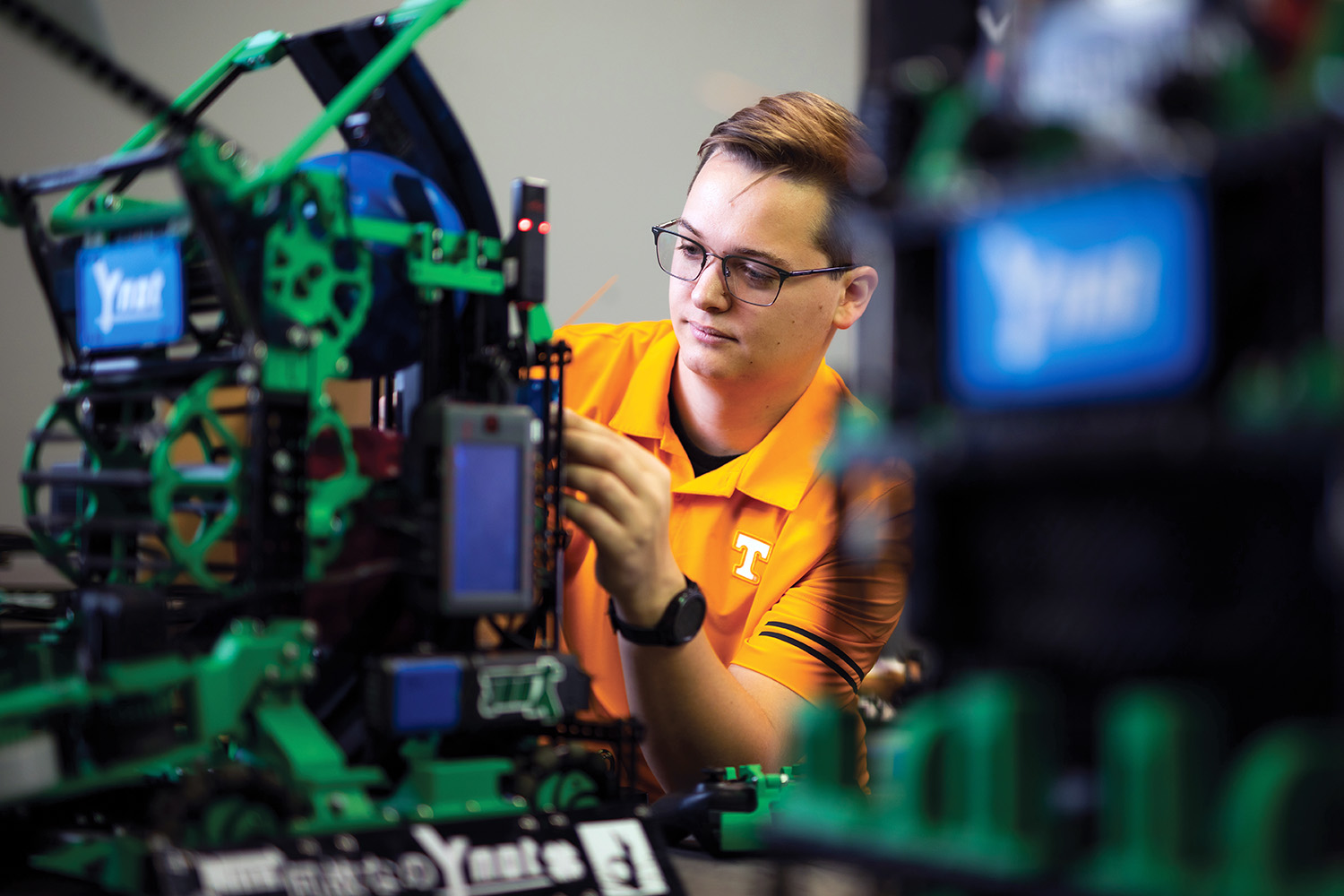 The next step was to secure funding. “I knew I needed to give a reason for them to contribute other than my personal affinity for robotics,” said Kobes. “As I researched STEM education, I learned that the US was desperately lacking qualified STEM workers. I also learned that STEM careers offer some of the highest salaries. I knew from personal experience that participating in robotics helped foster my own interest in studying engineering in college. So I created a marketing campaign to share my findings with other students and persuade local companies to invest in robotics to produce more qualified workers in our state.”

As the story goes…the rest is history.

Over time, Team YNOT’s list of sponsors grew to include Tennessee Valley Robotics, the REC Foundation, Elegoo, and at UT, the Department of Industrial and Systems Engineering (ISE) and the Student Organization Travel Fund. The team was accepted for crowdfunding through the university’s VOLstarter program. With the help of John Kobza, professor of industrial and systems engineering, Team YNOT was able to move from Kobes’s room to its own dedicated space in the Utilities Services Building.

Soon the team started racking up awards, building their reputation as fierce competitors on the VEX U Robotics scene. From earning the rank of fifth in the world skills standings and qualifying for the Vex Robotics world championship in their very first year to taking down the 2019-20 VEX U world champions from Purdue University in the finals this past summer, Team YNOT has quickly risen to the top. But robotics competition was only half of Kobes’s plan.

Throughout its short history, Team YNOT has contributed hundreds of hours of service to VEX and the VEX Robotics Competition by volunteering to help run high school and middle school competitions.

“At these events,” said Kobes, “our team members serve as either judges or referees for the competitions, helping things to run smoothly for participants. We believed that it is incredibly important for younger students that these competitions be rewarding so that they maintain interest in science and engineering in college and STEM careers later in life.

“We are also dedicated to mentoring younger teams from coast to coast, creating a space for communication and collaboration with these young teams so they feel comfortable asking for advice and sharing their struggles and innovations. This collaboration began during my high school career, when I created the WhyNot Alliance—the namesake for Team YNOT.”

In January 2020 Team YNOT was able to host UT’s first official VEX tournament: Tower Takeover, which brought more than 150 students, coaches, family and friends to Rocky Top. Thirty-two teams from around the state competed for seven qualifying spots at the 2020 Tennessee VEX state championship. Upon their arrival on campus, students and coaches were treated to T-shirts and swag bags from the Tickle College of Engineering and the ISE department.

“I believe a servant leader leads by example, working as an equal with those he is leading. It is someone who puts each person in the group above himself.”
—Grant Kobes

Kobes knew the event was a success. “Many students from technical schools as well as rural programs around the state were on campus for the first time in their lives,” he said. The tournament coincided with the launch of the UT Promise Scholarship, which assures free tuition and mandatory fees to qualifying Tennessee undergraduates with a family income below $60,000 a year. “Robotics students who never dreamed they could afford to attend UT for engineering are now perfect candidates—and Team YNOT wanted to be the first to welcome them to campus.”

In an essay he wrote in his first semester for a leadership studies course, Kobes stated, “My preferred version of a leader, the type I strive to be, is a servant leader. I believe a servant leader leads by example, working as an equal with those he is leading. It is someone who puts each person in the group above himself.”

Griffin, Kobes’s original faculty mentor, said it was rewarding to have watched Kobes achieve his goals.

“I have known Grant for years, since our precollege summer programs,” said Griffin. “It is an honor to see his growth as an engineering professional since the 2016 HIITES Program, his Volunteer spirit to provide broader impact and community engagement with high school students to learn about robotics, and his continuing impact on engineering undergraduates to get involved in VEX U.” 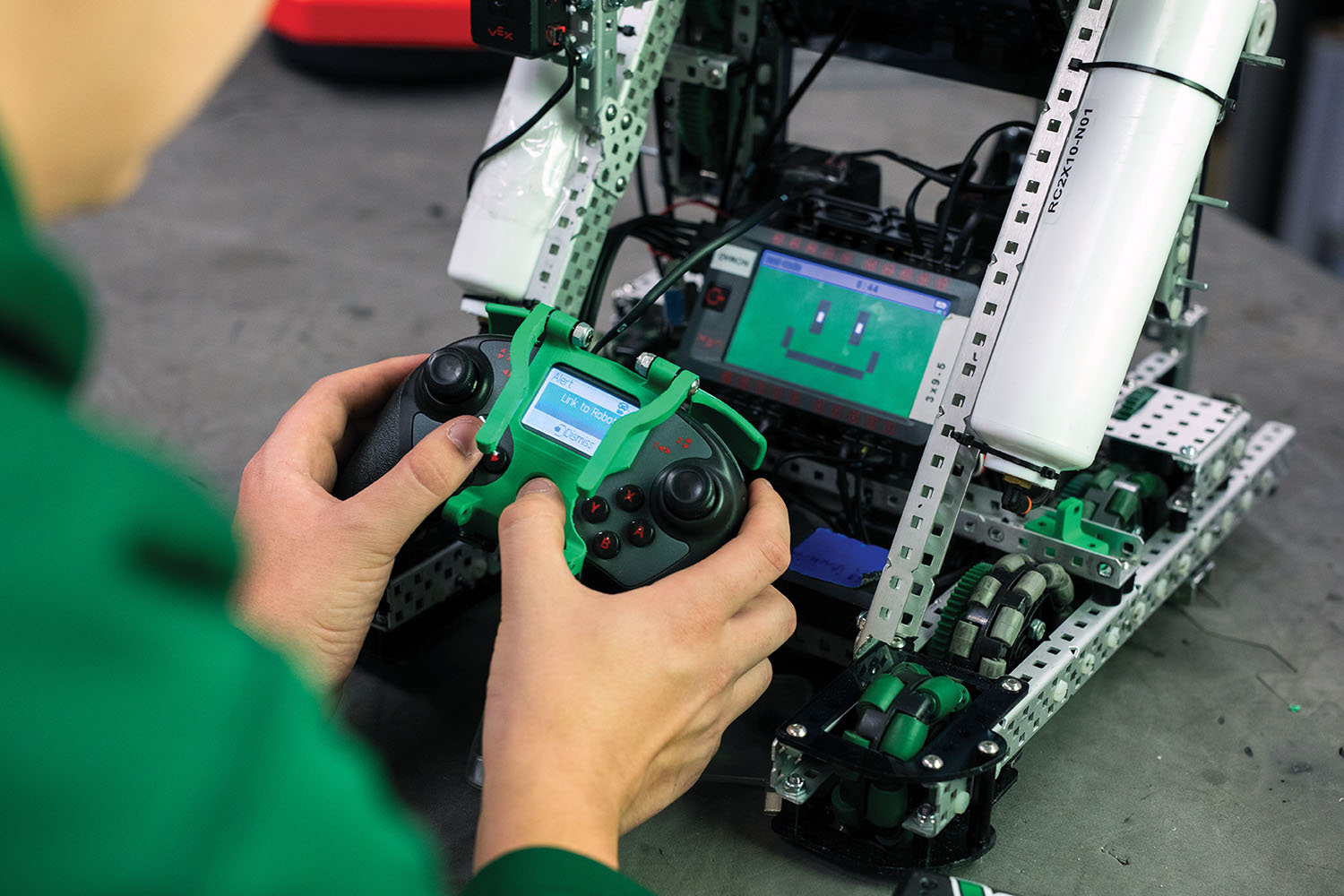 Throughout his years on Rocky Top, Kobes established himself as the sort of leader he wrote about back when he first arrived. When asked to reminisce on his proudest achievement—of which he had plenty to choose from—he said it was winning the 2021 Excellence Award, the highest judged award given at the VEX U world championships.

“We were able to demonstrate how YNOT optimizes our performance using designers from Tickle’s mechanical engineering department, programmers from the computer science department, an automation expert from ISE, and an archival specialist from anthropology who compiles our engineering notebook. One of our best builders was a wildlife and fisheries major. Our success demonstrates what UT students can achieve when they work in collaboration.”

Shortly after the world championship, he was recruited by the vice president of advanced manufacturing and automation at Honeywell Aerospace to be a part of a rotational development program. After graduation he will complete rotations in automation, metal additive, and manufacturing engineering at Honeywell Aerospace in Phoenix, Arizona, then join a team of experts overseeing the company’s innovative projects.

Kobes said his time in the Tickle College of Engineering provided innumerable experiential learning opportunities. He was able to build his robots using resources such as the Min H. and Yu Fan Kao Innovation and Collaboration Studio, where, he says, “faculty were always milling around, eager to assist students with their projects.”

Having arrived on campus as a man with a plan, Kobes believes he was certainly encouraged and enabled to achieve his dreams.

“The skills I discovered and perfected through my coursework enabled me to implement my vision and realize my dream of winning the VEX U world championship while helping other students find their own passions within their respective engineering fields. My hope is that I served my campus community in a manner deserving of the faith UT put in me as a freshman scholarship recipient. The legacy I leave behind is now an internationally renowned program where current and future engineering students continue to experience hands-on learning through robotics while serving their community.”