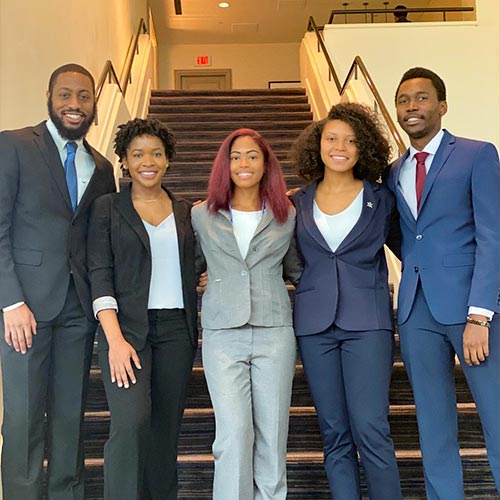 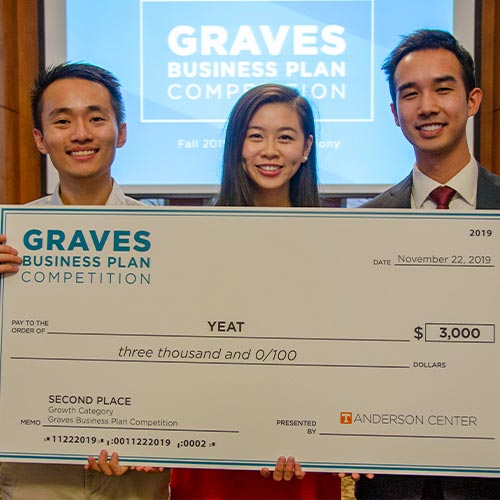 The Graves Business Plan Competition judges selected the team of Frank Gao (ISE), Ashley Chen (ISE), and MBA candidate Colton Ku, as its second-place winner. The team’s idea, Yeat, proposes a new type of food delivery service. The award came with a $3,000 prize and follows their first-place win in the Vol Court Pitch Competition, which brought them $1,500. 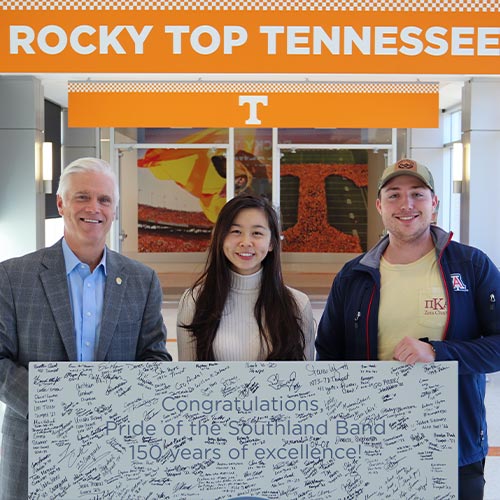 A three-year project led by ISE students and ISE Professor of Practice and Engineering Entrepreneurship Director Lee Martin culminated in a display of the Pride of the Southland Marching Band, just in time for its 150th anniversary. Ashley Chen and Jake Isaacs helped guide the project through its final stages, with dozens of students taking part by the time it was done. The exhibit featured four display cases, several walls of photos, and an interactive kiosk on the first floor of the Student Union, plus 10 large-scale photos and an audio narration—by Martin himself—in the skywalk between the two parts of the building. 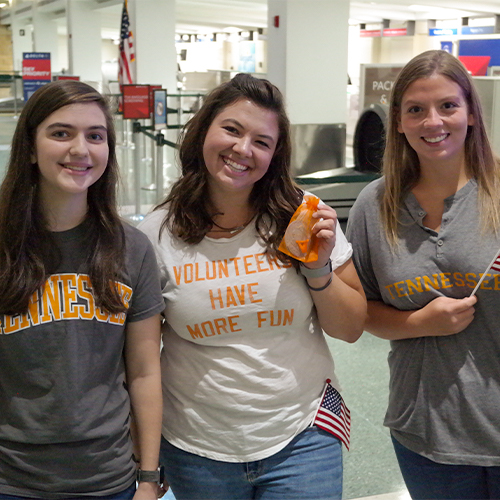 Service Learning and Outreach with 3D-Printers for Engineers (SLOPE) handed out over 120 3D-printed coins to veterans returning from Knoxville Honor Air Flight 29 as part of an effort to give back to those who served. Students Regan Newman (MABE), Mallory Stevenson (MSE), and Natalie Wieber (MSE) helped produce and distribute the coins.

CEE students Nancy Abdo, Joseph Allston, Connor Campbell, Meet Patel, Payne Susong, and Jay Thota were part of a group honored by The Tennessean as its People of the Year for 2019. The media outlet selected those who have worked to make the Natchez Trace Bridge safer for the honor, including those students who worked on a senior design project to design new safety rails under the guidance of Senior Lecturer Jenny Retherford.

A UT team is one of 10 finalists in NASA’s annual Moon to Mars Ice and Prospecting Challenge, for their project plan, “This is Now a Drill.” The team will be required to build a water extraction device that can drill through soil, find ice, extract and filter water, and provide statistics about the soil. The team is composed of MABE students Jody Walker, Vu Nguyen, Gabriel Gonzalez, Shayan Shirani, Kai Feng Xin, Riley Chambers, Daniel Block, and Kiel Russell.

Graduate student Stian Romberg (MABE) recently received recognition for his research in large-scale thermoset additive manufacturing. The work, being done in collaboration with the Polymer Materials Development team at ORNL’s Manufacturing Demonstration Facility, has the potential to address some of the major shortcomings of thermoplastic materials in large-scale printing applications, including z-direction properties, print resolution, and cost.

The DoE’s Innovations in Nuclear Technology Research and Development Awards saw a trio of nuclear engineering students among those honored. Doctoral candidates William Cureton and Peter Doyle each won second place in their respective categories, while master’s student Travis Smith won for research he submitted as an undergraduate at the University of Michigan. These students also received gifts totaling $6,000 in addition to conference and travel opportunities.